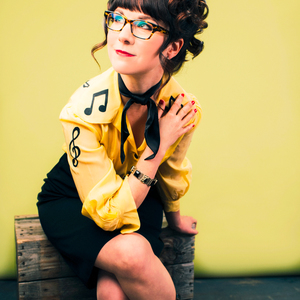 Fiddler, singer, and stepdancer April Verch knows how relevant an old tune can be. She was raised surrounded by living, breathing roots music—her father’s country band rehearsing; the lively music at church and at community dances; the tunes she rocked out to win fiddle competitions. She thought every little girl learned to stepdance at the age of three and fiddle at the age of six. She knew nothing else and decided early on that she wanted to be a professional musician.

She took that leap, and for over two decades has been recording and captivating audiences worldwide, exploring new and nuanced places each step of the way. On April 12, 2019, Verch released her twelfth recording, Once A Day, via Slab Town Records. A followup to her 2017 career-spanning release The April Verch Anthology, this new album is a celebration of classic country music of the 50's and 60's. Recorded in Nashville by Bil VornDick and produced by Doug Cox, Once A Day presents Verch with a full country band, featuring a cast of legendary musicians who helped shape this influential era of music (Redd Volkaert, Al Perkins, The Time Jumpers fiddlers, among others).

While Verch is perhaps best known for playing traditional fiddle styles from her native Ottawa Valley, Canada, her performances extend into old-time American and Appalachian styles and far beyond, for a well-rounded tour-de-force of North Americana sounds. Verch and her fellow trio members pare down their arrangements, highlighting the simple pleasures of upright bass, guitar, clawhammer banjo, voices, fiddle, and stepping in intimate conversation. At the heart lie Verch’s delicate voice, energetic footwork, and stunning playing.  Sometimes she sings, steps and fiddles all at once, with apparent ease and precision. Verch is - as they say - a triple threat in performance, her live show a beautiful companion to her music: versatile, robust, and masterfully executed.

Verch won’t be the one to tell you about her championship titles, nominations, and awards, or the fact that she was one of 6 fiddlers who represented the Canadian fiddle tradition to the world at the 2010 Olympic Winter Games in Vancouver, as part of a segment called "Fiddle Nation”.  Instead, in speaking with her, you’ll hear about how passionate she is about sharing her music; in small gatherings in remote communities in Iqaluit, to large prestigious concert halls like Mozartsal in Vienna.

Even as she plays with the tradition she inherited, Verch keeps the community-fired celebratory side of her music at the forefront, honing a keen awareness of how to engage contemporary listeners. It’s why Rolling Stone cited her “One of the 12 best things we saw at MerleFest in 2016.”

“Just as contemporary bluegrass has Alison Krauss as an ambassador, the Ottawa Valley has April Verch,” said NPR’s Marco Werman on “The World.”  And Verch never forgets the roots of her music, that connection to the people out there in the audience, on the dance floor, to the community sparked by a good song.  “It’s about joining together to celebrate everyday life, through music.  We’re all in this together.”

For over two decades, fiddler, singer-songwriter and step dancer April Verch has been recording and captivating listeners worldwide. The Ottawa Valley native has garnered praise from music’s heavy hitters including NPR, Rolling Stone, No Depression and more, for her fresh and feisty approach to deep North Americana. Verch’s signature sound blends together regional Canadian, American old-time, bluegrass, country and Americana, resulting in a well-rounded tour-de-force of traditional sounds. On stage is where her diverse repertoire comes to life, with a presence that is versatile, robust, and masterfully executed. Her delicate voice, energetic footwork and stunning playing have brought her to stages across the globe, wowing audiences with her jaw-dropping performance. Verch’s ability to preserve the authentic folk traditions of the past and reintroduce them into the musical landscape of the present is a testament to her masterful musicianship and widespread appeal.

On April 12, Verch released her twelfth recording entitled Once A Day, on Slab Town Records.  On this album, Verch pays a heartfelt homage to 1950s and 60s classic country—a sound that may be surprising to some fans, but is integral to her musicality. Verch herself handpicked the record’s fifteen tracks, breathing life back into some of the most treasured tunes in traditional North Americana. April’s charmingly honeyed vocals pair flawlessly with the illustrious Southern grit of a masterful cast of some of Country Music’s most esteemed veterans. The album’s diversity can be felt both sonically and emotionally, ranging from moments of reflection and introspection to soul-baring honesty, all the while painting a comprehensive portrait of the musical landscape of the time.

Recorded in Nashville by Bil VornDick and produced by Doug Cox, Once A Day features the talents of country veterans including steel guitarist Al Perkins (Dolly Parton, Emmylou Harris), guitarist Redd Volkaert (Merle Haggard) and fiddler Kenny Sears (Mel Tillis, Grand Ole Opry). From the title track penned by Bill Anderson and recorded by Connie Smith, to Loretta Lynn’s “You Ain’t Woman Enough,” and Webb Pierce’s “You’re Not Mine Anymore,” the album is a dynamic crash course in one of Country Music’s most influential time periods. Her admiration for these musicians and this iconic era is evident from start to finish. Void of contemporary gimmicks and over-production, Verch revels in the history and lets the music speak for itself.

“In many ways, making this album was not a choice.  It was something I felt I had to do.  It has been more daunting than any other project I’ve embarked on, because these songs, these artists, the history of this music matters to me on the deepest level.  It is a love letter and a thank you letter in one, to the artists, songwriters, musicians, and industry professionals who created, perhaps in some cases without even realizing it, an era of music that speaks to me in a way that no other music does. If someone hears a song on this album and that prompts them to look up and love the original that will be the highest compliment I could receive,” explains Verch.

Fans can expect to hear these irresistible reimaginings, as well as other fan favorites live, as she and her band mates Cody Walters (bass, banjo) and Korey Brodsky (guitar, mandolin) bring their highly sought after performances to venues and festivals around the globe.

From Emmy Carter, Booking Director at The Cedar:

"We're thrilled to welcome April Verch back to The Cedar's stage for the first time since 2013, joined by local openers Corpse Reviver. As a venue, The Cedar strives to book multi-talented artists like April, who seamlessly mixes Canadian folk tunes, Americana, bluegrass, and country. If you love string bands and acoustic music, this is a not-to-be-missed show from an incredible Canadian artist."